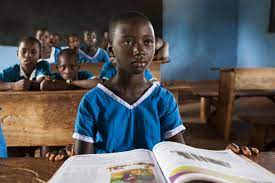 However, it is apparent that Nigeria is not thinking in terms of 100 years because as Abraham Lincoln averred: “The philosophy of the school room in one generation will be the philosophy of government in the next”.

The rising figures of out-of-school children and child-hawkers who are of school age and should be in school also confirm the poor educational pathway for Nigeria. More so, those who are in school do not have a conducive learning environment as they are made to learn in a dilapidated structure and at times, no classroom.

The model had been used successfully in China, Germany and Ghana before Nigeria adopted it in 1989.

Good and quality education has been all but a dream in Nigeria. Some of the problems facing this sector include the infrastructural deficit, poorly formed teachers, low level of attendance and lately, insecurity.

We have often seen pictures on national television, print media and social media pages on the deplorable conditions in which students study across the country and this cuts across all geo-political zones.

Pupils sit under trees, on the floor and with no proper learning materials; in such conditions, we do not expect to produce the brightest of students. These pupils do not have writing materials, sitting desks, textbooks and other tools necessary to give them a qualitative education. This is not a good outlook in the 21st century with the advent and giant strides of technology, artificial intelligence and machine learning, where developed countries now teach coding right from the basic level. It is no wonder we are backward on many fronts because the foundation is faulty. A house is built from the foundation and a shaky foundation spells catastrophe in no distant future.

I interacted with two people who are primary school teachers with Nigeria Certificate in Education (NCE) but could barely understand a complete sentence in English.

Some Nigerians have argued that we do not need to learn in English language alone and that we can train our people in our own languages. The most vocal voice with this reasoning has been the immediate past Emir of Kano, Muhammadu Sanusi Lamido. However, that is not the case in this instance as these teachers studied all their lives in English but could barely speak it. Before being admitted to a Teachers Training College (TTC) in Nigeria, it is expected that you have gone through primary and secondary education.

Also, the TTC has a duration of three years. So it beats my imagination that these teachers could hardly communicate with me in English.

In 2018, Governor El Rufai of Kaduna State made the headlines for sacking about 22,000 teachers.

In a survey conducted by the National Open University of Nigeria (NOUN), 83 per cent of teachers scored less than 25% in mathematics and literacy. The cause is due to severe underfunding, corruption and lack of quality administration in this section of tertiary education, and the consequences are dire, it noted.

Until we understand that the most important people in society are teachers then we are a lost society. Greek philosopher, Aristotle once said: “Those who educate children well are more to be honoured than those who produce them; for these only gave them life, those, the art of living well”.

Education is the bedrock of any nation and the earlier we realise this, the better for our society. We must give maximum priority to our teachers and the teaching profession.

However, a recent report places this number of out-of-school children a little above 13 million and the number continue to rise. The consequences are illiteracy and incapacitated youths that would add little or no value to nation-building. These children become a menace instead of a blessing to society. They cannot find jobs to make ends meet due to their lack of basic education and therefore resort to illegal means for survival.

President Muhammadu Buhari at a recent Global Health Summit in London, said, “You can’t succeed outside of your educational qualification”. This buttresses the point that we need good and quality education if we are to thrive as a nation.

Insecurity recently became an issue in the Nigerian educational sector. It is safe to say that the educational sector has been the most affected by the rising insecurity in the nation. Since the infamous kidnapping of the Chibok girls in 2014, it has been one incident to another and the occurrence has significantly increased. Schools have been the soft and easy targets for kidnapping, killings and the wanton destruction of school properties. Many states have had to shut down schools due to the severity of the situation in different areas of the state. It is not rocket science to deduce the impact of this in our education system and the future consequences.

The government, I repeat, needs to see education as the bedrock of any nation not just in making promises but in affirmative action.

A drastic look at our education system is pre-eminently important and urgent attention needs to be given if Nigeria is to turn the tide anytime soon. Our curriculum has to be prepared with the 21st century in mind or as it is known “Information Age and Knowledge Economy”.

Adie, a medical doctor, is a House Officer at the University of Abuja Teaching Hospital. He can be reached via, adiepatrick7@gmail.com